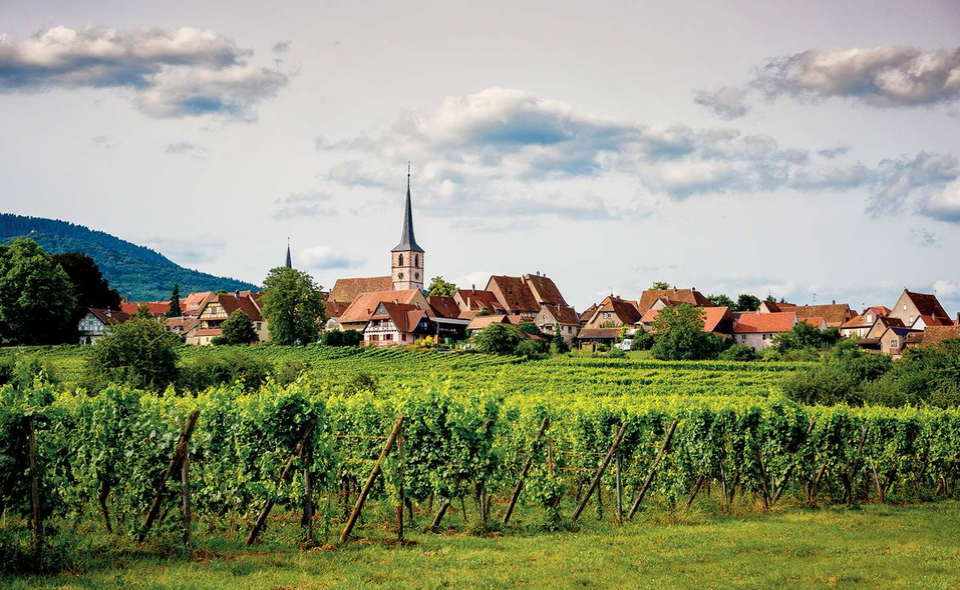 Renowned for some of the finest expressions of Riesling found anywhere on the planet, the Trimbach family have been winemakers since 1626 and owners of the estate in Ribeauvillé for over two centuries. The house’s meteoric rise to international acclaim began In 1898 when Frédéric Emile Trimbach received the highest distinction at the International Wine Fair in Brussels. Today the house is run by cousins, Jean and Pierre, along with Pierre’s daughter Anne and Jean’s son Julien who represent the 13th generation to enter the family business.

The jewel of the estate is the tiny 3-acre Clos Sainte Hune vineyard which has been owned by the Trimbachs for over two centuries. Clos Sainte Hune lies inside the boundaries of the Rosacker grand cru, yet the Trimbachs modestly prefer to let the name of the vineyard speak for itself rather than emphasising the cru designation. In total the estate is blessed with 40 hectares in many of Alsace’s most highly-prized sites which are sheltered by the Vosges Mountains and reflect the region’s mosaic of limestone, sandstone, marl, and clay soils.

The Trimbach family has a special passion for the Riesling grape thanks to its incredible finesse, freshness, and seductive aromatic character. Head winemaker Pierre insists on only releasing their wines when they are ready to be drunk which means that some of Trimbach’s masterpieces spend five to seven years developing in the estate’s cellars before they are released to the market.

In addition to the iconic Clos Sainte Hune Riesling which showcases the unique terroir of this great vineyard and the Trimbach family’s masterful winemaking, the estate produces a second magnificent dry Riesling, the Cuvée Frédéric Emile. A delicate blend of two grand cru sites, Geisberg and Osterberg, this Cuvée exudes precision, purity and a distinctive flinty streak of minerality. Both of these wines will reward patience in the cellar, developing attractive notes of toasted bread and white truffle as they age.

In contrast with other top Alsace producers like Zind-Humbrecht whose wines offer power and generosity, the typical Trimbach house style is elegant and restrained with minimal residual sugar. Hubert Tribach, Jean’s father, describes the family’s philosophy to winemaking as “concentrated not heavy; fruity, not sweet; bracing rather than fat; polite rather than voluptuous".

This delicate balance between elegance, freshness, and fruit has proved a winning combination with wine connoisseurs around the globe. These are gastronomic wines which offer huge potential to be paired with a diverse array of dishes, and thus it is no surprise that Trimbach is listed in all of France's 26 Michelin 3-star restaurants.