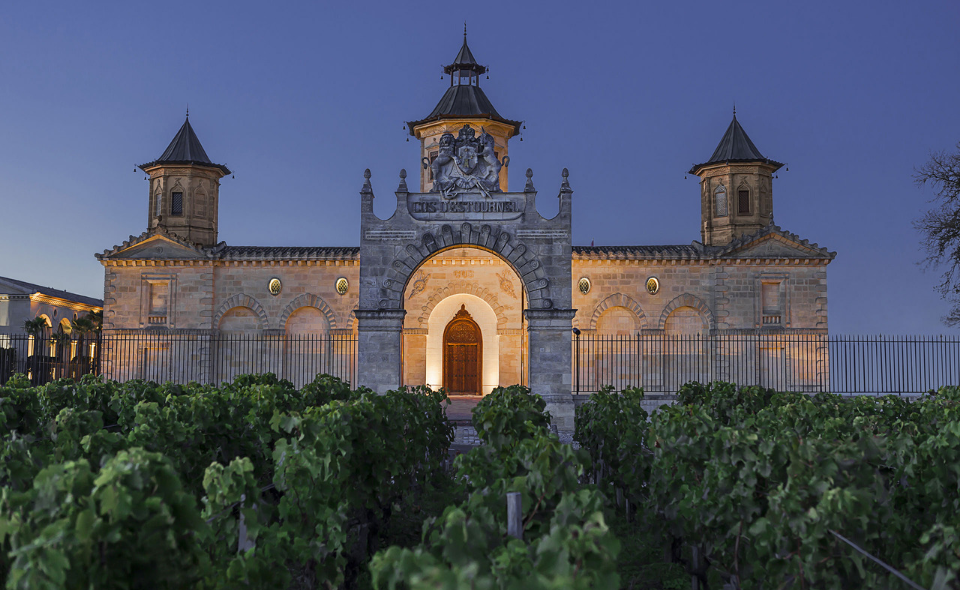 Visitors to Cos d'Estournel are immediately struck by the pagoda-style cellars which were built by Louis-Gaspard d'Estournel in the 1800s. His fascination with India led to Cos d’Estournel’s wines being exported to the subcontinent and also inspired the chateau’s extraordinary aesthetic which combines gargoyles with oriental architectural flourishes and carved palace doors from Zanzibar.

As well as pushing the boundaries of 19th century winery design, the pioneering Louis-Gaspard was amongst the first to bottle, label, and sell his chateau’s own wines. Such was the quality of Cos d’Estournel’s wines that two years after Louis-Gaspard’s death the chateau was recognised as a Second Growth in the legendary 1855 Classification.

The chateau’s current owner, the French entrepreneur Michel Reybier, has invested heavily in updating the winery and vineyards in recent years. Today Cos d’Estournel is regarded as the finest estate in the appellation of Saint-Estèphe. Its wines are frequently compared to top chateau in the neighbouring appellation Pauillac which is home to three of Bordeaux’s five Premier Cru estates.

In the Gascon dialect “cos” translates as “hill of pebbles” which is an apt description of the estate’s terroir. Cos d’Estournel’s 91 hectares of vineyards are divided between gravelly soils which are well-suited to Cabernet Sauvignon along with smaller areas of clay where Merlot thrives.

The chateau’s top wine, Cos d’Estournel, typically has an abundance of spicy dark fruit along with muscular tannins and a firm structure. Although Cabernet Sauvignon is the principle ingredient in the blend, the relatively high proportion of Merlot adds a distinctive smoothness and opulence on the palate.

Cos d’Estournel regularly receives exceptional reviews from international wine critics; the 2016 vintage was awarded a perfect 100 point score by James Suckling, Neal Martin, and Lisa Perrotti-Brown of Wine Advocate. This is a wine that is built to age, making it a magnet for wine collectors and investors. In exceptional vintages Cos d’Estournel can be expected to age for half a century and it is not uncommon for the wines to remain full of life a century after the harvest.