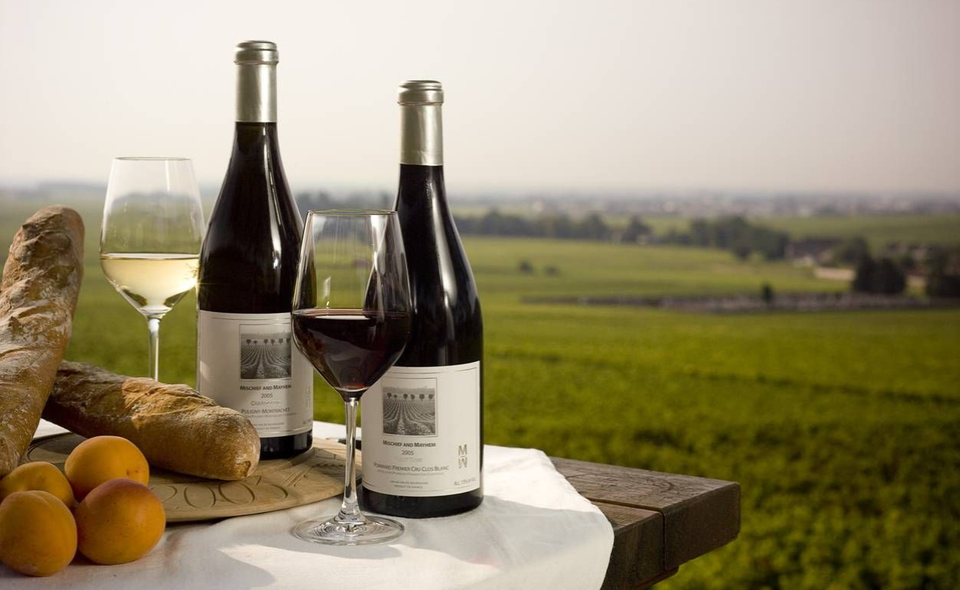 Mischief & Mayhem was founded in 2003 by Michael and Fiona Ragg who were drawn to the pretty village of Aloxe-Corton by a burning passion for wine and for the charming Burgundy region. Michael worked for the Berry Bros & Rudd wine merchants in London for a decade before deciding to turn his hand to winemaking.

Initially the couple focused on using their remarkable contacts across Burgundy to buy in top quality wines which they then finished themselves. In 2012 they then took the plunge to become a fully-fledged domaine with the purchase of a prime 1 acre plot of vines in Aloxe-Corton, followed by a further Premier Cru plot in Savigny-les-Beaune in 2013. The Raggs have also shifted to buying in greater quantities of grapes rather than wines to give them greater control over the whole winemaking process from fruit to barrel.

The typical Mischief & Mayhem style is pure, clean and incredibly focused wines which speak eloquently of the terroir which gave them birth. Their whites display a crisp, precise minerality while the reds are light and elegant. Michael usually only uses a light touch of oak which allows the authentic personality of the Pinot Noir and the influence of the terroir to shine through.

The Raggs’ negociant and domaine business model has proved a huge success, offering the couple the freedom to select from Burgundy’s finest terroirs while also enjoying full oversight of their own vineyard holdings. While other producers are heavily dependent on Burgundy’s highly variable weather conditions, the Raggs have the flexibility to source the very best grapes from each vintage. This means their bottlings offer consistently high quality year on year and represent some of the best value for money anywhere in Burgundy.

Thanks to their combined negociant and domaine approach, the Mischief & Mayhem portfolio is diverse, offering everything from stunning AOC Bourgogne Chardonnay and Pinot Noir through to their outstanding Grand Crus from Corton-Charlemagne and Clos de Vougeot. From the newcomer to the world of fine wine to the true Burgundy expert, the wines of Mischief & Mayhem offer enough breadth to interest every type of buyer and collector.